It’s once a week at least that I get that sour-stomach, adrenaline-blood-tingle reaffirmation of the Buddhist precept that death comes suddenly and without warning (let alone a courtesy honk). I drive a minimum of 80 miles a day on the 101, so I’d like to say these things are just par for the rush-hour course, but most of them are my fault.

I first suspected this conductive ineptitude around age ten, when I sensed Big Al’s reluctance to let me drive the boat, even in the open, calm, deep-water back bays of Lake of the Woods. It became painfully obvious (literally) the next summer when I slammed the Grumman into the dock because its imminent approach freaked me out and I couldn’t let go of the throttle on the 10hp outboard. I’m clumsy at best on a John Deere Gator, a liability on a jet ski, and a veritable threat on a forklift. I can ruin a hedge and make onlookers scatter just by climbing into the seat of a ride-on lawnmower. Snowmobiles flee before me of their own accord. 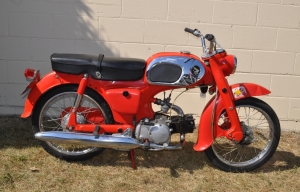 And forget about dirt bikes – my friends all kicked ass on them and I couldn’t even shift out of first. Seriously. And I’m talking 90cc Hondas that like blind eight-year-old girls get around on just fine.

I’ve been in stupid wrecks and dumb fender-benders and gotten hit turning left in front of people and sticking too far out into traffic. I’ve knocked side mirrors and crushed my passenger door against a telephone pole taking a corner too tight. Hiding beer at 17 (the worst possible time to do something stupid), I three-point-turned my way into a bush and every Austin-Powers-point-turn-attempt after that to extricate myself just wedged me deeper and deeper. I’ve even rear-ended my own mother driving like a reckless jerk.

A lot of this has to do with my serious spatial awareness problems, for one. Not “serious” as in I have some advanced neurological deficiency, but as in I’m just plain bad at knowing where cars or other objects are and how fast they’re coming or going. This contributes to an already high level of anxiety over the fact that I’m hurtling a ton.5 of metal around white and yellow lines that seem more or less arbitrarily scrawled across expanses of slick black pavement – or whatever the vehicle at whatever speed on whatever surface.

But I’m also competitive, and impatient and retaliatory, which can make me forget my anxiety altogether and pretend I’m Ayrton Senna (great biopic of him, by the way) — like I did Tuesday evening through Decker Canyon.

Despite this overwhelming evidence of my crappy-driverness, it’s not an easy thing to admit.

I’ve been thinking about the implications of this admission, though, and it seemed worth writing about.

For most of my life, I’ve believed that one’s masculinity was linked to what proportion of one’s blood was gasoline. Driving’s a skill, and a super-macho skill, and I wanted it. Bad. I grew up on Steve McQueen movies, and that image of Bullitt in his 1968 Mustang GT fastback is about as Marlboro Man as they come for me.

But, Q.E.D., my blood-octane levels are actually pretty low, so this Steve McQueenism is actually responsible for 83% of my lifelong feelings of inadequacy.

Thanks, Steve.
Thanks a lot.

The incomparable Jim Blaylock once told a group of us that his father used to say, “The more letters a guy has behind his name, the less likely he is to be able to change a tire.”

Now, despite having bought a Chilton AND a Haynes for every car I’ve owned, I’ve yet to loosen so much as a single nut under the hood of my own car, and I know what Jim and his dad mean by that. (I do change my own tires, though. Really. They’re, uh, not under the hood.) I’ve mentioned this before At The Wellhead, but it’s apropos here, too, so I’m repeating it: Tom McGuane, author of Nothing But

Blue Skies and Ninety-two In the Shade and liver of the outdoors life described in his essay collections The Longest Silence and Some Horses, said in the intro to the latter that he never wanted to be “one of those writers with soft hands,” and he obviously accomplished that and set the bar about nine times as high as I can reach on a stool.

Plenty has been written about the legacy and pitfalls of this mantle of American Literary Macho, a primogenitor of which was ole Papa Hemingway himself, so I’m not going to belabor that point any more than to say this whole driving/cars thing fits into a much bigger fucking massive morass of expectations and preconceptions that I don’t remember picking up but that I’ve clung to and that has influenced my behavior and worldview for as long as I can remember.

But anyway, this post was supposed to be about getting beyond all that,

and I’m happy to report that I’m starting to see the benefit of copping to my sanguinary-octane deficiency. Driving and fixing cars is simply not my path to rough-hand macho-sleek-chic masculinity.

In fact, maybe – just maybe – über masculinity of any kind’s not what I’m after, after all.

Which is probably another not-shock to people who know me, but let’s all take a second, shall we, to remember that most of the time we’re the last ones to know the most obvious things about ourselves.

Practically speaking, this awareness may keep me from spending an absurd amount of money on, say, a Bugatti. Because despite how amazing it’d feel to have a thousand-and-one horses under my feet, I’d not double-clutch or whatever you have to do with that ridiculous of a car and drop the tranny, or hit the gas like it was my Jetta and bury the thing in a brick wall fifty yards away before I could turn the wheel (à la Grumman), or try to take curves like Jeff Gordon and end up Misty-flipping off that bend by La Piedra.

Alright, alright, it’s probably not only awareness that’ll keep me out of a Bugatti, or any other $1.6MILLION car. But it may keep me from thinking, say, a $200k Jaguar, or anything over 400 horses, really, is a smart buy. I just don’t have the minerals for that kind of car, and while I’m as susceptible as the next guy to the incessant luxury-is-better consumer-culture McLaren Group onslaught, I know that it’s an ultimately vapid juggernaut, and maybe I can avoid being crushed by it by bowing out of this particular leg of the Macho Race.

I’ll do plenty of stupid things in my life, make plenty of bad decisions based on insecurity and fear and vanity, but hopefully it won’t be the car that’ll get me.

Beyond practicalities, giving up an entire set of criteria by which I’ve measured and found wanting my masculinity is a taste of freedom. It probably never should have been a part of how I saw myself, a metric by which to measure my inadequacy, but it was. I know a lot of people get and make a lot of meaning out of cars and driving – some of my best friends have rebuilt cars from the ground up. They take great pride in it and it’s part of who they are. I think Brent’s amniotic fluid was 91 octane.

To have the fact that for me it’s empty and has no actual bearing on my life or who I am dawn on me is pretty amazing. It’s energizing and motivating and rewarding and makes me feel like I’m connecting, somehow, to What Really Is.

I know it’s a Socrates quote, but check out Cornel West‘s take on it if you have some hours to spare.

This chink in my faux-masculine suit of armor is an example of the kind of preconceptions I’ve been reexamining of late. It’s an example, but it’s not actually one of the things I’ve been actively picking at. Which is also indicative of this Examined Life process – most of the time, whatever insights or breakthroughs or satori or whatever you want to call them I have are not things I’ve been looking for. I don’t choose which walls I end up tearing down. If I try to, it’ll never come.

What I do is just do the work. I read and study and sit and practice dharma –

For what or how long, I never know, and I’m constantly wondering if I have missed or am missing something. And then when something finally does happen, it’s not what I expected at all, and sometimes the dawning of it takes a really long time.

I met Swami Vidyadhishananda a few years ago, and the one thing I asked him was how best to make reparation for harms done. His advice was not to seek people out, but instead to

“prepare your heart to be spontaneous.”

He didn’t tell me how to do that, and I wasn’t about to sign on to the S.E.L.F.’s 90 minutes of mantra practice a day every day for the rest of your life to find out, but that advice has become something of a guiding light, and these mini-satori along the way – like this whole driving thing – are sustenance, like cups of Gatorade on the marathon route.

They’re also proof that you’re laying the groundwork, priming the cosmic pump, so to speak, so that you’re ready to recognize and receive the lessons when they do come at you – spontaneously or otherwise.

At the same time, I realize this one realization isn’t anything all that special. A lot of people don’t give a shit about cars or driving or anything like that, and it doesn’t affect their sense of self and never did. It’s certainly nothing new to redefine masculinity or reject it altogether. Mick’s been singing about men and their different cigarettes for 50 years.

And yet, this discovery process has to be repeated forever anew because no matter how many times you’ve read about it, it’s not the same as experiencing it. And each of us has to grow up on his own, right? And write his own manual based off trial and error.

Which is what this blog has become in a lot of ways. The narration of my own coming-of-age-story.

So file this one under Get-Over-Yourself-Turning-Points, I guess, or Sunday Afternoon Satori.

What’s one of yours?

When did you realize things weren’t quite the way they seemed?