In Defense of Hallucinating

hallucinate (v.)
c.1600, “deceive,” from Latin alucinatus, later hallucinatus, pp. of alucinari “wander (in the mind), dream; talk unreasonably, ramble in thought,” probably from Greek alyein, Attic halyein “be distraught,” probably related to alaomai “wander about” [Barnhart, Klein]. The Latin ending probably was influenced by vaticinari “to prophecy,” also “to rave.” Sense of “to have illusions” is from 1650s.

So the idea’s been around a while.

In common parlance, we take “hallucinating” to mean seeing/hearing/experiencing things that aren’t really there, usually as a result of ingesting a psychedelic drug. Or, in the parlance of my youth, “tripping balls.”

Well, there’s schizophrenia, too, of course, but I’m not about to tackle that in the same post as peyote…

There are lots of opinions about psychedelic drugs and the taking of them, the two ends of the opinion spectrum probably being those who think that it’s a ridiculous activity to engage in because they’re perfectly happy to have their feet firmly anchored in reality and have no need whatsoever to experience any “illusions,” thank you very much; and those who think it’s the be-all and the end-all and the key to unlock humanity’s mystical cooperative harmonic future.

A) Those of you who haven’t imbibed any psychotropic compounds and think you’re escaped the world of illusion – I mean, honestly? We’re still playing that what-you-see-is-what-you-have game? With all we know about reality and space and science and politics and secrets and cover-ups and religion and recession and rock’n’roll and just EVERYthing? There are SO many more pervasive and sinister hallucinatory palls that have fallen, at various points, over our lives and culture than any fleeting thing a few micrograms of LSD can produce on the smokescreen of your mind.

“Fleeting” leading us to:

B) The actual illusions of psychedelic experience aren’t real illusions, really. They’re metaphors or examples – gateways at best and nightmares at worst. Those feelings of interconnectedness and bliss? They’re just chemical euphoria. I’m with George Harrison, who said that ultimately, it’s a false insight that psychedelic drugs give you, just the tip of the iceberg, and with Alan Watts, who in explaining why he stopped partaking said,

“Once you get the message, you hang up the phone.”

The message, of course, being that the entire world we live in and what we call reality and the metrics by which we deem a life a “success” are by and large delusions.

This idea has been so widely disseminated over the last 60 years since people like Harrison and Watts, etcetera, popularized these old-old ideas that to repeat it is almost passé. As in, I know that the majority of you all are somewhere in between those two extremes and thinking, “Gee, thanks, Prichard, but I saw The Matrix. What are you getting at?”

What I’m getting at is the difference between knowing about something and knowing something from experience. Which, if you’ve read many of the two-dozen or so posts here At The Wellhead, you’ll know is a pretty big deal for me – and a much much much bigger deal than I used to think it was.

One of my favorite Notes On Existence is a well-used bit from Frank Zappa:

Remember, information is not knowledge;

knowledge is not wisdom;

wisdom is not truth;

truth is not beauty;

beauty is not love;

love is not music;

music is the best.

I absolutely used to think gathering information would make me wise, and once wise, I’d manifest beauty and truth and love and music wherever I went. This is a simplification, sure, but not a gross over- one.

Ha! Found this at: Exiled Surfer

How I’ve changed from that to whatever I try to be now is a long story of baby steps and nearly imperceptible (or at least forgettable) shifts in perspective. It certainly wasn’t the direct result of psychedelic drug use – or any kind of single, white-light, burning-bush experience. I don’t go in for those, or really trust too much anyone who does.

I go in instead for the long, slow smolder, the repetitive, grinding plod. Which is another of the differences between taking drugs to have (and at the same time break through) illusions – or meditation-retreating or fasting or Primal screaming or TMing or Orthodox-mystic-trancing or Gestalting or whatever the mode of de(con)structing – and living on the other side of them.

Living on the other side is hard. At the very least, it takes effort and determination and perseverance.

Sliding back into illusion is easy. That’s why most everyone stays there.

The actual shattering of preconceptions – whether LSD-induced or otherwise – is simply information. It can feel like a whole lot more than that. It can feel like what you thought was the solid earth is really nothing more than shifting sands in a vacuum. And maybe it is(n’t). But even so, that’s still just information, and there’s a real problem in getting stuck in information and confusing a simple glimpse of a different way of thinking with an alternate but equally permanent reality. We all know people who get stuck in that in-between space – those very nice but vaguely superior and ultimately despondent burnouts who love to tell you what you’re doing wrong and what life should be about and how it should be lived but don’t do much more than swallow another pill to get back there for just a little while. It’s like commuting to Wonderland.

Knowledge, as opposed to information, is answering the attendant “So What?” to an insight, whether you saw it with a head full of acid or gleaned it during meditation or realized it as you turned a corner and saw a peach tree in bloom. What it means for you that the world is all shifting sands in a vacuum can only be answered via a process, by seeing what happens when you apply the implications of that shifting-sands understanding to your daily life and behavior and your interactions with other people.

Wisdom comes from living long stretches of time in that application. Or at least I assume it does, as it’s only been a little while that I’ve been trying to apply principles to my life. Well, ones of any redeeming value, at least.

But at least I’m no longer under the illusion that you can just know about things. That’s the problem with being arrogant and precocious and young, right? You think you know, and if there is anyone around to tell you you’re wrong, you can’t hear them. And if you’re lucky/spoiled rotten by life in general and there are no real consequences to your delusions, there’s really nothing to show you you’re wrong.

The advantage to living in such a house of cards, though, if there is one, is that it’s a massive and very fragile illusion, so when it does finally topple, you have no other option than to seriously readjust. It’s not like, “Huh, roads are really just strips of asphalt stuck onto the surface of the earth. Roads qua roads don’t have any inherent meaning at all! Crazy.”

It’s like every assumption you’ve ever made about who you are and how you function in the world is shown to be a fiction and a fantasy and a lie you’ve been telling yourself since the day you realized you could lie. 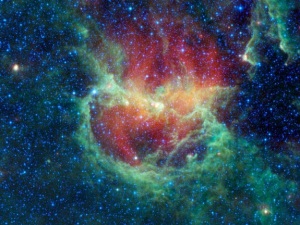 I’m not saying this wouldn’t have happened to me if I’d never ingested any psychotropic compounds. I know plenty of people who’ve had their minds blown and universes rearranged without such pharmacological aids. I also know people who’ve eaten enough psychedelics to shuttle a herd of buffalo to Alpha Centauri, yet are still as square and deluded and clueless as Paul Ryan loving Rage Against the Machine.

Besides, that little world of mine was hardly sustainable…

Yet – and here comes, finally, the whole “defense” part we started with – hallucinations are effective metaphors. And to declare, in case you missed the implications earlier: by “hallucinate,” I mean all those illusion-shattering techniques out there.

It’s those very fleeting illusions, paradoxically, that unsettle what we think of as solid ground.

Those glimpses – I don’t want to say of true reality, but maybe beyond what we think reality is or was – make it easier to remember that the structure of our daily lives is just an arbitrary, man-made structure. It makes the scaffolding easier to see. Because if you know, walking around every day, that the reality you’re experiencing is as flimsy as the sights and sounds and sensations brought on by a bite of San Pedro cactus (or a deep meditation or whatever), well, maybe you’re the tiniest bit less likely to get sucked into some nefarious greed-riddled illusory hellhole.

The point of remembering our proximity to illusion – our immersion in it, really – is not, as many people would first assume, a kind of nihilism. In fact, it should engender quite the opposite experience. Once you move beyond the smug teenage-angstyness of “seeing through everybody and everything,” being a child of illusion, as Trungpa would put it, is a way to pare away what doesn’t matter from what really does.

And what really matters?

I for one have no idea what “the real thing” is, whether there is one or whether it’s just layer after layer, illusion after illusion, turtles all the way down. That doesn’t matter so much. What does matter is the seeking to break through, the not abandoning doubt for the comforts of an easy faith, the continual testing and investigation of the things that aren’t working for you, and the perpetual appreciation for those that are.

This was the strangest of these cliché inspirimages I could find. Pic: 99 Venus

It’s a way to keep your ego in check – because the ego’s all about illusion and delusion and telling you that what feels comfortable is better than what gives you the eerie uncanny existence shivers – and a way to keep that flywheel of gratitude spinning.

I realize this may border on a Keith Richardsian advocation of drug use,* but I don’t imagine too many of you are likely to run out and eat an eighth of mushrooms this afternoon after lunch instead of going back to work.

Though, now that I think about it, some of you maybe should.

You know who you are.

Wait – actually, no, you probably don’t.

Which is probably part of the problem.

What have been some of your illusions over the years?

How’d you get through them or past them?

IF YOU’VE NEVER EXPERIENCED ANYTHING LIKE THIS AND HAVE NO IDEA WHAT I’M TALKING ABOUT, SEND ME AN EMAIL.

* I recently read Keif’s memoir, Life, in which he’s always saying stuff like, “Now kids, don’t try this at home, but heroin, if you use the best stuff, and use it with just the right amount of highest-quality Merck cocaine – that combination allows you to stay awake for about week at a time, which is basically the best thing you can ever do for yourself, creatively speaking.”

5 thoughts on “In Defense of Hallucinating”